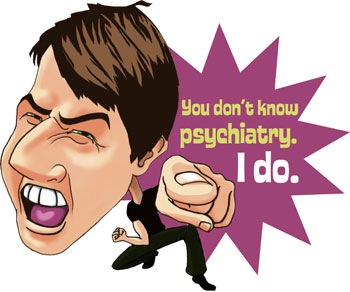 Cruise 'is Christ' of Scientology

TOM Cruise is the new “Christ” of Scientology, according to leaders of the cult-like religion.

The : Impossible star has been told he has been “chosen” to spread the word of his faith throughout the world.

And leader David Miscavige believes that in future, Cruise, 44, will be worshipped like Jesus for his work to raise awareness of the religion.

A source close to the actor, who has risen to one of the church’s top levels, said: “Tom has been told he is Scientology’s Christ-like figure.

“Like Christ, he’s been criticised for his views. But future generations will realise he was right.”

Taking pot-shots at Scientology is too easy (as evidenced by the last line of the Sun's story) so I'm not even going to go there. I already have an opinion on Mr. Cruise (who does not believe that anyone should ever take psychiatric drugs): he is misguided at best but is probably simply a bleedin' idiot .

But Christ? Here's one reason why Tom Cruise is not like Christ:

The quote: "… Like Christ, [Cruise]’s been criticised for his views…"

I might have to consult my religious history advisor John Cowart on all the details, but I think if you take it back to the original Latin (or Aramaic) you'll discover (and everyone agrees, Jews, Christians, Muslims, Atheists, and Agnostics) Christ was CRUCIFIED for his views.

So until the government tacks Maverick and his need for speed up to a tree and gets all Mel Gibson on his ass he's not the least bit like Christ.

Mr. Miscavige, you sir are an imbecile.

Hi Eric,
Boy, am I surprised to be cited as an authority on anything!

The uniqueness of Christ lies not in the fact He was crucified. The ancients tortured many men to death with that horrendous form of execution.

During the 70 A.D. siege of Jerusalem, the Roman army, under the leadership of Vespasian and his son Titus, ran out of wood to crucify people and resorted to ripping off the doors of houses to make more crosses.

What makes Christ unique among religious leaders is that He rose from death under His own steam.

St. Paul speaks of “Jesus Christ our Lord…declared to be the Son of God with power, according to the spirit of holiness, by the resurrection from the dead”.

Apart from that, Christ is just another dead guy.

He either rose or rotted.

There’s no other alternative.

Personally, I've never understood why people listen to what celebrities have to say just because they're famous. A famous idiot is still and idiot.

As a scientologist, I'm deeply offended...

Vlad, thanks for dropping by!

Unless you are being serious, in which case I suppose you won't be back. Oh well. When the mothership arrives, I'll sure feel sorry!

this is what i love: "until the government tacks Maverick and his need for speed up to a tree and gets all Mel Gibson on his ass he's not the least bit like Christ."

HA. it's too bad, cause i really loved tom cruise. definitely the "maverick" tom cruise. i don't know if i can still let go of that tom cruise. but all of the other tom cruise is out the window.

same with mel. he was so nice to look at; funny, smart-ass. but, it's just out the window. the "p" factor (personality factor) is so determinant with me if you're hot or not.

now, buddhist richard gere? fucking hot. but, then again, if he is gay, it proves what a fag hag i am.

and jesus, too. i always go for those damned untouchables. i know i would have been all mary magdalene on his ass.