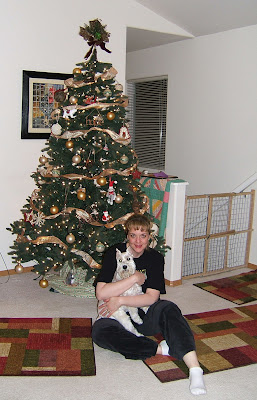 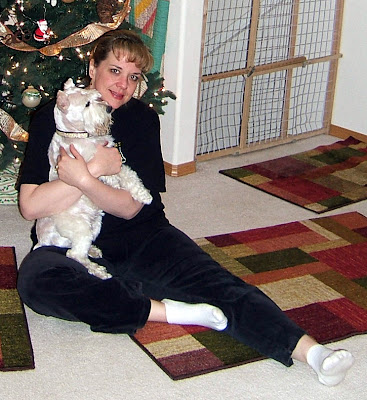 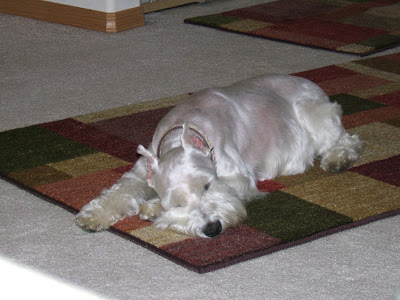 The best things about our new home:

Y'know how sometimes when you go to someone's house and they have an ice maker and the ice tastes all funky? We don’t have funky ice. Our ice is smoove like buttah.

2. The living room / kitchen / dining area is open, has a high ceiling in the living area, and has lots of light. Kelli especially loves herself some light. I grew up here. I don't get nearly as affected by darkness as she does. I kind of like it being dark all day in the winter.

3. We have a garage we can park in. Granted, only Kelli can park in it now but my goal is by Christmas we'll have my half of the garage free of moving boxes and stuff so I can park in there too.

And if we screw something up like, oh I don't know, overtighten the bolts between the toilet tank and the bowl and it shatters the bowl into a dozen pieces – we don't have to tell anyone.

Well, okay, we have to tell the home improvement store we bought the new toilet from that we need a new toilet but I never had to have the conversation that goes

"Jimmy? Hi, this is Eric your renter. Eric E-R-I-C, yeah, that renter, anyway … well.. I screwed up a repair I should have warned you about ahead of time and I broke your toilet so do you have a preference on which kind of toilet we go buy?"

Which makes me all nostalgic for the thousands of the conversations that went,

Sorry for no posts for THREE WEEKS but I've been kind of blocked lately.

I can blame it on the house move but it's more than that. Nothing funky is going on, I'm just blocked. And not in the "needs more bran" way either.

That being said, I wanted to post about something, anything, and while typing the title of this post it reminded me of a story I don't know if I've told here.

Once upon a time when I was a relatively junior dispatcher and definitely a junior trainer I had a recruit teach me an important lesson.

This was back when we worked 8hr days (at least the recruits did) and swing shift was the best shift. 3pm to 11pm was perfect: busy when you got there and progressively busier until you left. You could stay up late and sleep in. No alarm clocks. Magic.

Occasionally a bunch of swing shift dispatchers went out to the movies or to bars or whatever after work. I don’t drink and was / am painfully shy so the bar idea was never for me but the movie nights were fun.

On one particular evening a group of dispatchers did a girls night out to a dance club / seedy bar / whatever and my recruit at the time went with them.

The next day I heard from one of the attendees that my recruit was fun to drink with and that she mentioned she was happy that I was her trainer.

"He's so funny. He says things like 'For the love of God, type SOMETHING!!!'"

While I'm always happy when my recruits appreciate my training style, this was unwelcome news.

When I said "For the love of God, type SOMETHING" I wasn't joking. I was dead serious. We had a pretty serious call and she wasn't entering anything into the computer. Arrrgh!!

Granted, exasperation is funny if you are not the one who is exasperated. However if you are the cause of the exasperation, you should be less than amused. And if your trainer is calling for divine intervention then you should realize that you haven't done so well.

This was only one of the reasons she didn't end up getting through training. Another example would be the time she received a call from a grumpy old man complaining about the recurring problem of teenagers "burning rubber" in his parking lot and she connected him to the fire department.

She's a nice enough person though and if she's reading this… well crap I'm just happy some one is.

These days I am a little more careful about what I say.

For instance I now say "For the love of Dog" because

b) it's a joke grenade with a good 3 second fuse, and

c) I would find it even more amusing if some ultra PC person made a complaint about my language and cited this as an example (and yes, people complain about a lot of stupid things so this actually happening would not surprise me).

Just in case, I already have the mea culpa letter written:

To Whom It May Concern: I apologize for offending my coworkers by taking Dog's name in vain on (date of occurrence). I realize that as a representative of my department, my city, my state, my nation, and my home planet that I must behave professionally at all times. Once again I offer my apologies and will endeavor to regain your trust. 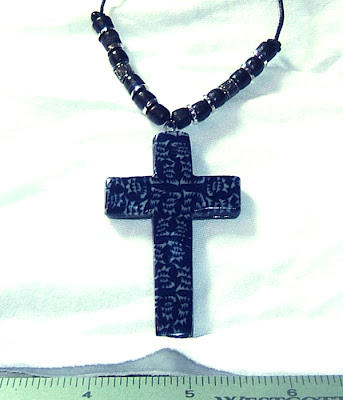 Ages ago Smussyolay commissioned a cross: a small blue cross pendant.
I did up a batch of clay into an interesting design then set to making the actual cross.
After a couple of failed attempts it turned out pretty well (if it do say so myself).

Originally I made a matching skull pin (call it a yin-yang thing) and got close to acceptable but not completely acceptable to my standards. Months went by. So last week I send her the requested cross along with the first of my "Gothic Zhong" red dragon pendants. It's chunkier than she probably likes but since I like it, I had to share. She may donate it to the homeless if she so desires !!