Octopussy proves that one can forgive a lot of goofiness if the pacing is fast enough. It has clowns, twins, an all-girl ninja force, a Faberge egg, elephants, a tiger, a submarine that looks like a crocodile, a nuclear bomb, and a crazy Russian general but it’s still fairly grounded to reality.

Orlando Sentinel:
Elevator Crushes Woman Caught Between Floors
October 1, 1991 ANCHORAGE, ALASKA —
A woman was crushed in a parking garage elevator as fellow passengers tried to save her. The woman was caught Sunday between floors of the J.C. Penney Co. parking garage elevator. She was getting on when the elevator started going up and she slipped, police said. ''As she stepped on the elevator, it suddenly started to go up,'' police Lt. Bill Gaither said. ''There was no one standing at the control panel, and the doors stayed open.'' The woman dangled half on and half off the elevator and was crushed as five other passengers frantically pressed buttons to save her, Gaither said.
Credit: http://articles.orlandosentinel.com/1991-10-01/news/9110010789_1_elevator-crushed-parking-garage

Skyfall "gay scene"
Outwitting Squirrels: 101 Cunning Stratagems to Reduce Dramatically the Egregious Misappropriation of Seed from Your Birdfeeder by Squirrels by Bill Adler Jr.
Crochet: 30 Beautiful Crochet Patterns for Beginners by William Blackburn
The Mission, the Men, and Me: Lessons from a Former Delta Force Commander by Pete Blaber
Aftershock
The Invisible Man film 1933
31 - by Rob Zombie
Our Brand is Crisis

Soapdish has an all-star cast but, while Eric and J liked revisiting it, Drew thought it was weak sauce.

Later we pour one out for Miguel Ferrer (RIP), brother J suggests how best to watch Twin Peaks, and Eric discusses some movies he watched this week: The Man Who Wasn’t There, Diabolique 1955 and Diabolique 1996, and The Russian Woodpecker.

Another Coen Brothers movie that Brothers E and J love but Drew dislikes intensely, the Big Lebowski is chock full of quotables.

This episode has a fair amount of meandering so be prepared. We discuss, among other things, cutting the cable cord and Carrie Fisher’s virginity.

Compare to Wolf of Wall Street:
569 fucks in 180 minutes for a 3.16 fucks per minute which is the top of mainstream films.

Goodwill Hunting and Scarface have 1.22 and 1.21 fucks per minute

The Grey has 1.3 fucks per minute (and is a Christian film, right?)

14 hidden jokes and cryptic metaphors in The Big Lebowski - www.collativelearning.com

List of films that most frequently use the word "fuck"

Infographic: The Big Lebowski vs The Big Sleep

30 Years of Coens: The Big Lebowski , Christopher Orr, The Atlantic

Samwell - What What "In the Butt" 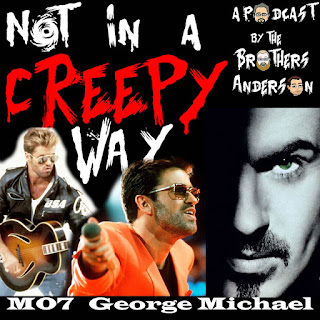 Lead by the steady hand of Brother J, the bros discuss the late great George Michael.

They specifically focus on the albums Faith, Listen without Prejudice, and Older as an example of how he was much more than a pop star.

May you swirl in the heavens you sweet talented man. Videos: General