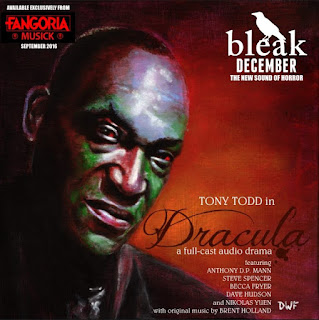 “I walk among them, a stranger in their midst. A city teaming with life and I, the angel of death.”
Thus begins “Dracula,” a full-cast audio drama produced by Bleak December.

As a lifelong fan of audio productions, from the classic radio of Arch Obler’s Lights Out to the newest audiobooks, I am always on the lookout for new horror selections.  So it was with eager anticipation that I approached this interpretation of Dracula.

The drama stars Anthony D. P. Mann of the Horror ETC podcast (and so much more) who is also the executive producer.  Mann’s Professor Van Helsing drives the story and his enthusiasm shows through and reassures us that we are in capable hands.

The supporting cast includes Steve Spencer, Becca Fryer, Dave Hudson, and Nikolas Yuen, all of whom give solid performances.

The count himself is portrayed by Tony Todd of Candyman fame.  This is perfect casting.  Todd’s voice is incredibly rich and his delivery is both seductive and menacing.

Brent Holland’s original music sets a perfect audio stage and the audio production itself is top-notch.  Listening with headphones highlights the masterful use of the stereo environment.   If this is any indication of the production values of future Bleak December projects then sign me up; I’ll buy everything they have to offer

Which brings me to my only criticism of Dracula.  It’s just under 30 minutes.  Make no mistake, at only $1.99 it’s still an incredible value but it left me wanting more.  More from Tony Todd, more from Tony Mann.

I want to live longer in the world they’ve created.

So to the dear reader I implore:  buy a copy of Dracula, now available at Fangoria Musick.


While you are there and in the Halloween mood pick up Edgar Allan Poe’s The Raven as performed by Anthony D. P. Mann and Maurizio Guarini (of the Goblins).


The New Adventures of Old Christine S01E01... by FallenKeith72


For horror fans around the world, Tony Todd is one of the most recognizable faces in the genre from his excellent performances in the CANDYMAN, HATCHET and FINAL DESTINATION franchises, as well as fright films such as NIGHT OF THE LIVING DEAD (’90), WISHMASTER and more. However, if you don’t recognize Todd’s face, you’re damn sure to recognize his voice, which has nearly as prolific a career as the performer in its own right. So therefore it’s with great excitement that FANGORIA announce that Tony Todd will play one of the genre’s most iconic roles in Bleak December Inc.’s audio play production of DRACULA, to be released via FANGORIA Musick!
Executive produced by and starring Anthony D.P. Mann, DRACULA will be the first of several classic horror audio adaptations between FANGORIA Musick and Bleak December Inc., with Todd playing the titular role of Count Vlad Dracula. Mann, who will be filling the role of Van Helsing in the play, has previously worked on two titles for FANGORIA Musick: TERROR OF DRACULA as well as his adaptation of Edgar Allen Poe’s THE RAVEN, which featured Goblin’s Maurizio Guarini.
“I’m honored and thrilled to form a partnership with Bleak December Inc and FANGORIA Musick, in presenting the first of hopefully many audio recordings of classic horror characters,” says Todd. “First up perhaps most iconic of them all… Yes, I’m so proud to lend my voice to Bram Stoker’s DRACULA. ‘I walk among men…’ I wish to add to Lugosi’s legacy.”
Future audio releases planned by Bleak December include DR. JEKYLL & MR. HYDE, THE PHANTOM OF THE OPERA, FRANKENSTEIN, and THE HOUNDS OF BASKERVILLE. DRACULA will be available for download through Fangoria Musick in time for Halloween 2016. Stay tuned for more information about DRACULA and other Bleak December productions here at FANGORIA.com!
Posted by Eric at 9/17/2016 09:57:00 PM No comments:

The Godfather Part III – Brother J hated it, Eric doesn’t like Andy Garcia in anything, and Drew tried valiantly to defend its honor.
References:
Classic Tales Audio Books by BJ Harrison
God's Banker episode of The Thinking Sideways podcast
Misophonia
Johnny Dangerously - Moroney Addresses the Court
Shock Treatment - Little Black Dress
File length 1:02:49
File Size 57.7 MB
Subscribe to us on iTunes
Listen to us on Stitcher
Like us on Facebook
Follow us on Twitter
Send your comments to show@notinacreepyway.com
Visit the show website at www.notinacreepyway.com


Brother J and I discuss the 1982 made for TV movie The Electric Grandmother, based on the Ray Bradbury story  I Sing the Body Electric,  which was also made into an episode of the Twilight Zone in 1962.  As this was our inaugural episode it is full of little mistakes I hope you find charming.  Comments are always welcome at show@notinacreepyway.com.  Visit the show website at notinacreepyway.com. We would also appreciate you giving us a 5 star rating on iTunes (as a tiny show this helps a great deal).

Check out this episode!

U2’s Achtung Baby is yet another iconic piece of music from 1991. While we each come at U2 from a different angle, all of us agree: if you get an opportunity to see them live, do so – they are amazing. And check the show notes, there are links to every piece of music, including all of the live tracks that we talk about. Immerse yourself.

Achtung Baby talk begins at about 41:00

Pizzicato 5 - Twiggy Twiggy
Pearl Jam - Even Flow
Red Hot Chili Peppers - Give It Away
Metallica - Enter Sandman
Marc Cohen - Walking In Memphis
REM - Losing My Religion
Amy Grant - Baby Baby
Rick Astley - Cry For Help
Mr. Big - To Be With You
Crash Test Dummies - Superman's Song
Temple of the Dog - Hunger Strike
Big Audio Dynamite - Rush
Natalie Cole - Unforgettable
Van Halen - Right Now
Alice Cooper - Feed My Frankenstein
Tom Petty - Learning To Fly
Crowded House - Fall At Your Feet
Marky Mark feat. The Funky Bunch - Good Vibrations
Spin Doctors - Little Miss Can't Be Wrong
Toad the Wet Sprocket - Hold Her Down
Naughty By Nature - O.P.P.
Ozzy Osbourne - No More Tears
Guns N' Roses - November Rain
Bryan Adams - (Everything I Do) I Do It for You
Matthew Sweet - Girlfriend
Hammerbox - When 3 Is 2
Superchunk - Skip Steps 1 & 3
Michael Jackson - Black or White
Roxette - Joyride
U2 All Along The Watchtower
U2 All I Want Is You
Windows 95 Startup Sound
U2 - Zoo Station Live
U2 - Even Better Than The Real Thing
U2 - One
U2 - One (Live 1997)
U2 One Popmart Mexico
U2 One 360 Rosebowl
U2 One acoustic Sessions of Innocence 2015
U2 One - Bono and Pavarotti
U2 - One (Bono and Adam interview)
U2 - One (VH1 Legends)
U2 - Until The End of the World
U2 - Who's Gonna Ride Your Wild Horses (live)
U2 - Paint It Black
U2 - Fortunate Son
U2 - So Cruel
U2 - The Fly - Vertigo Tour
U2 - Alex Descends to Hell For A Bottle Of Milk /Korova 1
U2 - Mysterious Ways (Vertigo Tour)
U2 - Trying To Throw Your Arms Around The World
U2 - Trying To Throw Your Arms Around The World (ZooTV)
U2 Trying to Throw Your Arms Around the World 1992 Paris
U2 - Ultraviolet (Light My Way)
U2 - Acrobat
U2 - Love Is Blindness (Live Sydney)
U2 - Love Is Blindness (Edge Solo)
U2 - Love Is Blindness (promo video from Numb single)
U2 - Love Is Blindness (Live from Rotterdam)
U2 - Bad (Live Aid)
U2 - Seconds (studio version)
U2 - Seconds (live at Red Rocks)
U2 - New Years Day
U2 - New Years Day (Live at Slane Castle - Elevation Tour)
U2 - Sunday Bloody Sunday (video)
U2 - Sunday Bloody Sunday (Live Aid 1985)
U2 - Sunday Bloody Sunday (Glastonbury 2011)
U2 - Sunday Bloody Sunday (Unplugged)
U2 - Vertigo (banjo session)
U2 Lemon (live)
Grace Potter And The Nocturnals - The Lion The Beast The Beat
Social Distortion - Dear Lover
Ben Stiller - Lucky Clovers
Johnny Cash feat. U2 - The Wanderer

NIACW 167 Curse of the Golden Flower

Curse of the Golden Flower is a gorgeous, majestic film. This is an Eric and Drew episode, recorded back in the two-host days: December 22, 2015 to be exact. Luckily we had this one “in the can” for times when life interrupted the recording process.
References:
Faerie Tale Theatre: The Nightengale
File length 46:23
File Size 42.5 MB
Subscribe to us on iTunes
Listen to us on Stitcher
Like us on Facebook
Follow us on Twitter
Send your comments to show@notinacreepyway.com
Visit the show website at www.notinacreepyway.com