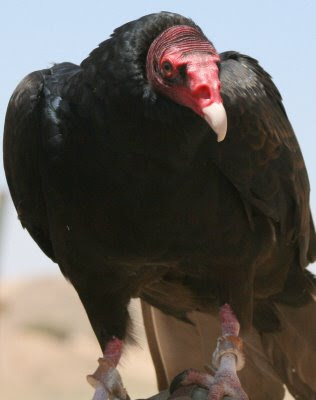 State police say a turkey vulture injured a passenger when it crashed through a minivan's windshield Friday.

The bird crashed into a red Dodge Caravan at about 8:15 a.m. on Interstate 80 in Parsippany. It whopped 32-year-old Vanessa Hurtado in the face, causing minor cuts. Shards of glass got caught in her eye.

The turkey vulture landed in the middle seat behind the driver, 35-year-old Jorge Hurtado, who wasn't hurt. He told police that the bird was alive for a brief time following the crash; the responding officer pronounced the animal dead at the scene.

Eagle Towing (no pun intended) towed the vehicle away. Vanessa Hurtado first asked that the vulture be removed from the car, lest it marinate in the heat.

Turkey vultures, which are not related to turkeys, generally soar in circles on wind currents and are often seen on highway shoulders eating road kill.

This isn't the first time a turkey vulture has left its mark on a New Jerseyan. In June 2004, one hit a motorcyclist in the head. While attempting to get the live bird off of him, the man lost control and struck another car. He died of his injuries.

Can Journalism Be Saved By A Fake News Show?

I am a news junkie but lately I have a pretty low opinion of journalists. Okay, maybe not journalists personally but the news outlets who feed us crap and call it news.

Perhaps it’s because I watched too much Lou Grant and 60 Minutes and listened to years of Herb Shaindlin but I have always though that the job of a journalist is to keep an eye on those aforementioned institutions (and others) and to report when they are lying to us and/or causing us harm.

Apparently that’s too much to ask these days.

But wait, all hope is not lost. Leave it to a fake news show to sum up the problem with the real news outlets.

Here’s part of a transcript (by Darcy Logan at Mahalo.com) edited and emphasized by me. Click on the YouTube link up top to see the video itself.

Jon Stewart: I gotta tell you. I understand that you want to make finance entertaining, but it’s not a f---ing game. When I watch that I get, I can’t tell you how angry it makes me because it says to me, “You all know.” You all know what’s going on. You can draw a straight line from those shenanigans to the stuff that was being pulled at Bear and at AIG and all this derivative market stuff that is this weird Wall Street side bet.

Jim Cramer: But Jon, don’t you want guys like me that have been in it to show the shenanigans? What else can I do? I mean, last night’s show---

JS: No, no, no, no, no. I want desperately for that, but I feel like that’s not what we’re getting. What we’re getting is… Listen, you knew what the banks were doing and yet were touting it for months and months. The entire network was and so now to pretend that this was some sort of crazy, once-in-a-lifetime tsunami that nobody could have seen coming is disingenuous at best and criminal at worst.

JS: The CEO of a company lied to you.

JS: But isn’t that financial reporting? What do you think is the role of CNBC? …

CNBC could act as—No one is asking them to be a regulatory agency, but can’t—but whose side are they on? It feels like they have to reconcile as their audience the Wall Street traders that are doing this for constant profit on a day-to-day for short term. These guys companies were on a ’s March through their companies financed by our 401ks and all the incentives of their companies were for short term profit. And they burned the f---ing house down with our money and walked away rich as hell and you guys knew that that was going on.

JC: … I think we have reporters who try really hard. We’re not always told the truth. But most importantly, the market was going up for a long time and our real sin I think was to believe that it was going to continue to go up a lot in the face of what you just described. A lot of borrowing. A lot of shenanigans and I know I did, I’ll bring it up, I didn’t think Bear Sterns was going to evaporate overnight. I didn’t. I knew the people who ran it, I always thought they were honest. That was my mistake. I really did. I thought they were honest. Did I get taken in because I knew them from before? Maybe to some degree. The guy who came on from Wachoviawas an old friend of mine who helped hire me.

JS: But honest or not, in what world is a 35 to 1 leverage position sane?

JS: But isn’t that part of the problem? Selling this idea that you don’t have to do anything. Anytime you sell people the idea that sit back and you’ll get 10 to 20 percent on your money, don’t you always know that that’s going to be a lie? When are we going to realize in this country that our wealth is work. That we’re workers and by selling this idea that of “Hey man, I’ll teach you how to be rich.” How is that any different than an infomercial?

JC: Well, I think that your goal should always be to try to expose the fact that there is no easy money. I wish I had found Madoff (sp?)—

JS: But there are literally shows called “Fast Money.”

JC: I think that people…There’s a market for it and you give it to them.

JS: There’s a market for cocaine and hookers. What is the responsibility of the people who cover Wall Street? Who are you responsible to? The people with the 401ks and the pensions and the general public or the Wall Street traders, and by the way this casts an aspersion on all of Wall Street when I know that’s unfair as well. The majority of those guys are working their asses off. They’re really bright guys. I know a lot of them. They’re just trying to do the right thing and they’re getting f---ed in the ass, too.

JC: True. True. .. I’m a commentator. We have—and you can take issues with the fact that I throw bulls and bears and I can still be considered serious. I’m not Eric Sevareid. I’m not Edward R. Morrow. I’m a guy trying to do an entertainment show about business for people to watch. But it’s difficult to have a reporter to say I just came from an interview with Hank Wilson(Sp?) and he lied his darn fool head off. It’s difficult. I think it challenges the boundaries.

JC: I wish I had done a better job trying to figure out the 30 to 1 and whether it was going to blow up. It did. Once it did I was late it saying it was bad.

JS: So maybe we could remove the financial expert and the “In Cramer we Trust” and start getting back to fundamentals on reporting as well and I can go back to making fart noises and funny faces.

JC: I think we make that deal right here.