Have a Biohazard Birthday 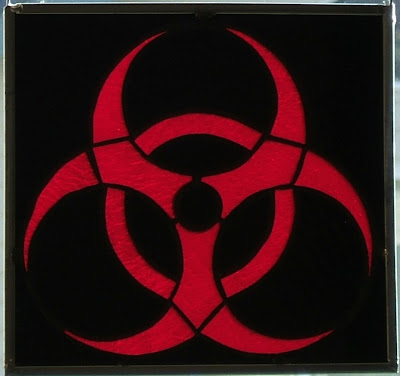 Happy Birthday to Drew, my youngest brother. His birthday was the 26 of September but this is the most timely I have given him a gift in maybe 10 years.

I wanted to make something appropriate but kind of evil looking. My mom was the one who came up with the biohazard symbol since Drew is a an engineer working in the environmental remediation field. His degree is in nuclear engineering but the radiation symbol is pretty boring. We agreed the biohazard symbol was much cooler.

Kelli was the one who suggested I use black as the background instead of using a clear or a light color. It worked perfectly. 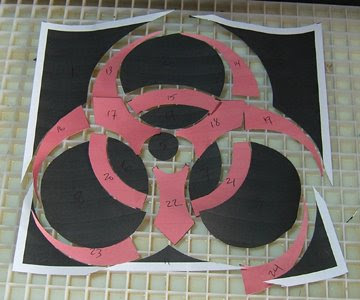 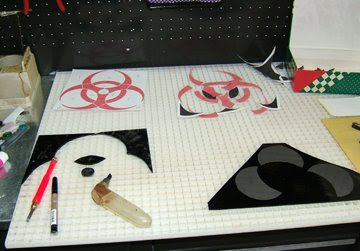 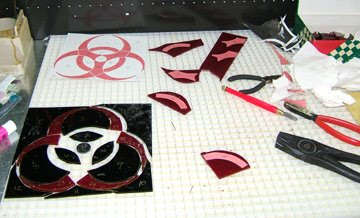 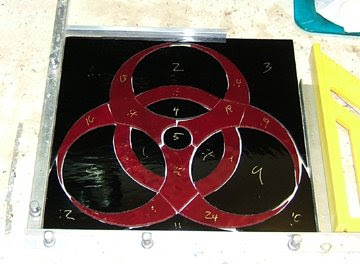 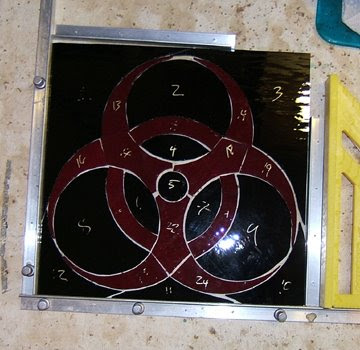 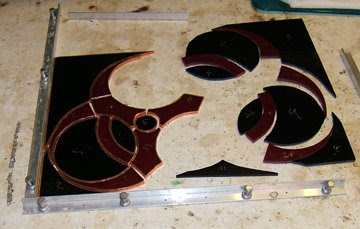 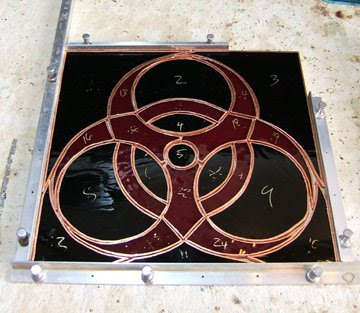 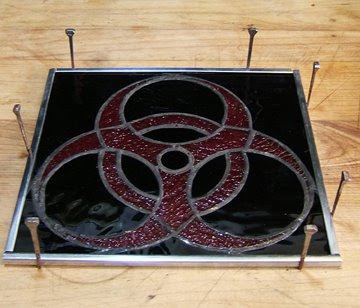 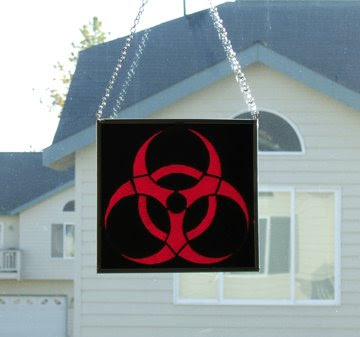 Today’s safety tip brought to you by the return of The Summer of Love.

Yesterday there was a 4 car accident in our fair city caused by the second most dangerous type of driver*. This female driver was DWBB, Driving While Bell Bottomed. 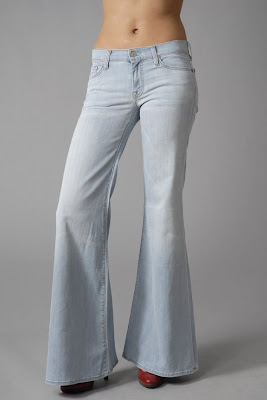 The driver caused the accident when she tried to brake to avoid a vehicle which had slowed quickly in front of her. Unfortunately she got the leg of her flared jeans caught on the gas pedal as she was trying to move her foot from the gas to the brake. A chain reaction ensued, fortunately causing no injuries, just vehicle damage. 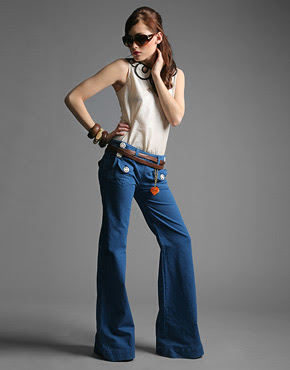 Beware of flares – they are unsafe at any speed. 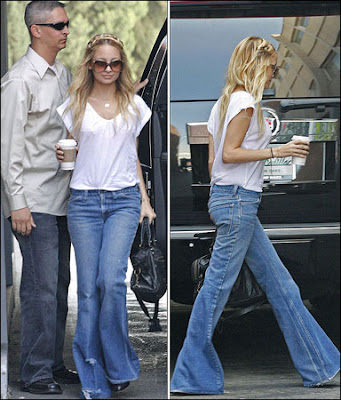 *The number one most dangerous driver is one who text messages while they are driving. Talking on the phone is bad enough but text-messaging?? One might as well be playing with your PlayStationPortable and cooking in your Easy Bake Oven on the highway. Mo-rons.

Incidentally, being a typical Los Anchorage accident it involved:

a Honda Civic, and

In those whose vehicles are more “green” end up getting black and blue in traffic accidents.

Outrageous (and not in a good way)

I’m not even talking about the 700+ Billion Dollar bailout of very private enterprises with very public monies. Although that’s so outrageous I can’t even blog about it right now.

I’m talking about the political rhetoric these days. For instance:

1) Florida Rep. Alcee Hastings on Wednesday warned two minority groups to beware of Sarah Palin because “anybody toting guns and stripping moose don’t care too much about what they do with Jews and blacks.” (FoxNews)

What? Firstly, moose is kosher (albeit not without the proper slaughtering techniques and supervision). I’m not Jewish but I’m pretty sure the Jews and the moose have a reasonably decent relationship. I can’t find any evidence of blacks having moose difficulties either. 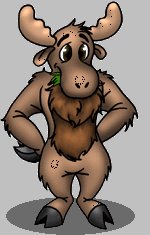 Leave the moose out of it Representative Hastings. Dumbass. *

’They're our next-door neighbors and you can actually see from land here in -- from an island in ,’” (LA Times) 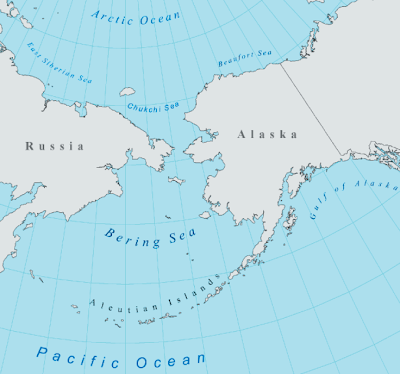 The distance between , (the most significant city in Siberia and ’s ) and is 1,958 miles (roughly calculated with Google Earth). to is 4,533 miles.

So except for wanting our natural gas pipeline to go through , she has no experience with any foreign relations. To imply otherwise is disingenuous at best.

3) The Obama campaign ran an ad saying McCain is so out of touch technologically that he doesn’t even use the internet or send email.

Who the falafel cares?

Apparently, due to his POW related injuries, he gets shoulder aches when he uses a keyboard or does other repetitive tasks so he relies on his wife or his staff to do these things.

What President is sending his own emails anyway? Do you think George Bush types “OMG we need 700 Brazillian dollars? What’s the exchange rate anyway on those – LOL !”

Your staff does that sort of thing, that’s why you have them.

4) I want to give Skinny G’s folks the benefit of the doubt but they come off as aloof and inept. She won’t answer questions including whether she supports Don Young or Ted Stevens. (Politico)

From this Alaskan’s point of view she should have a public opinion on that. Either she’s a loyal Republican supporting two senior statesmen despite current controversy or she’s a maverick standing against her party for the good of . She has to pick a side on this.

She also won’t let her staff or her husband comply with subpoenas or aid the investigation surrounding a simple personnel issue. This begs the question why won’t she just say, look, here’s the deal” and get it over with.

It’s clear we have a lot at stake with this election. So let’s cut the crap and make the candidates talk about real issues in a clear and calm way.

Is that too much to ask?

* This reminds me of Blood On The Snow, a true moose story. I crack myself up.

Fun is fun but you'll not hear any serious criticism of Skinny G from me.

This is due to either

b) according to the New York Times her staff has contacted at least one local blogger to tell them to "Stop blogging right now!." Read it here (and I didn't make up the headline)

I really don't care to write a political blog anyway but even if I had such an urge I'm not nearly anonymous enough to take on the possible future President of the United States (who are we kidding anyway?)

My readership is probably 25 regular readers (thank you all) but I sort of know people who know people and therefore I'd be on a tight leash if I crossed any real lines. I'm not going to put my employment at stake, thank you very much.

So no more Skinny G talk.

Tina Fey and Amy Poehler, however, are HILARIOUS!

Ask for a crab 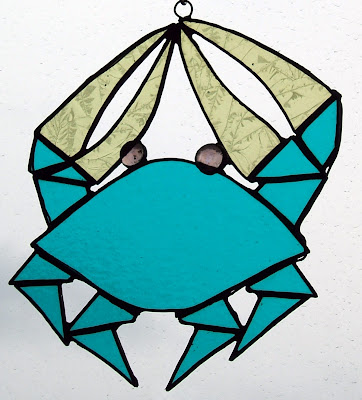 (originally posted September 11, 2006 as part of The 2996 Project administered by D. Challener Roe in which bloggers memorialized each victim of the terrorist attacks on September 11, 2001 individually)


Those who have read my blog already know about my love for guitars and my complete inability to find the patience or will to master them. Today I'm going to tell you about a guitarist I never met. His name was Joseph Lostrangio. 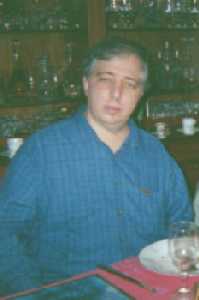 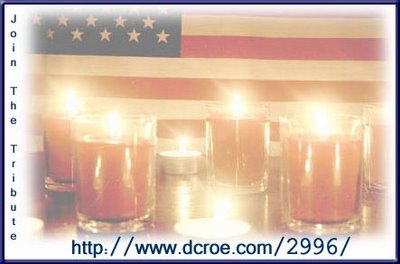 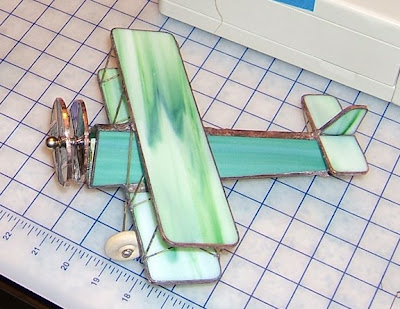 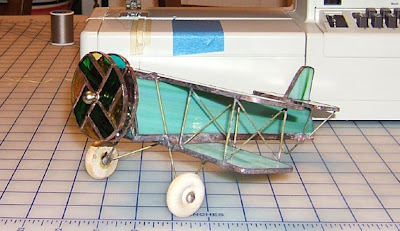 A gift for my former Sgt, Richard Stouff, recently promoted to Lt. Now that he's not in my direct chain of command I can say that he's a class act without it sounding like brown-nosing.