Slang, Dirty Words, and the UK

Due to my dear friend T, who lived in for a couple of years at the turn of the century, I was exposed to a great deal of pop culture during a short period of time and loved it. Embarrassingly so. Oh and candy. Lots of British candy. Two words: Malteasers = Yum.

There are lots of stories which I'll eventually tell but one of the things I love is British slang. Now that I'm addicted to re-runs of the Ricky Gervais podcast, the version of The Office, and the show Extras, I get to hear the slang again and it's so much fun.

Mind you I can't get away with actually saying many of these words and phrases because they don't sound right with an American accent. But I can think them. And thanks to Ted Duckworth's "Dictionary of Slang," now I have the spellings.

My current favorite word is: Whinge. (pronounced like "hinge" with a "w" in front)

The American word is "whine," as in "to complain."

The other great UK word is the ultimate ugly word in American English: the "c-word." Yes, it's four letters long. The one that the Vagina Monologues attempts to nullify. Yes, that one.

Here one simply doesn't say it. Too much trouble. In the its power is similar to the "f-word" in American. You wouldn’t say it around your mom or in polite company but it has a much more broad appeal over there.

The thing I learned from our British cousins is that you can conjugate the c-word. A character in a Denise Mina novel described having a "cunting headache," which I thought was a clever way of expressing the severity of the pain. Oh and the character happened to be female, so it's not a misogynistic word. It's just really really bad. It's the worst word. So it has some power behind it.

But, and I have a very Frank Zappa attitude about this, it's just a word. It can't actually hurt anyone.

Certainly words can hurt feelings but it's not the words themselves which cause the problem, it's how the words were delivered or whatever emotional baggage we carry with us in conjunction with the words. You can do some serious damage with totally innocuous words. I once got into trouble for calling someone a "grilled cheese sandwich." I blame Sam Kinison.

Racist language is an exception. Michael Richards was out of his cunting mind when he called those folks the n-word.

But some folks will get upset about the strangest and most benign words. I think I've mentioned before that one of my brothers has a problem with the word "tasty." It just makes him cringe.

Pasta, a co-worker, has a brother who has a great deal of difficulty with the word "ointment." Granted, he is the same person who refuses to eat the part of a sandwich which he has been holding while eating the rest of it, calling those bits the "sandwich handles" which he will leave on his plate, so clearly inpatient therapy would be recommended in his case.

I'd always recommend that one chooses their words carefully but I'll add this: don't be afraid to take a chance. Provided you have a decent grasp on what it actually means, throw some odd slang into your vocabulary. Not necessarily the naughty words but just a fun new word. It feels good.

And for those who don't like slang in any form:

a) you're probably not a big fan of this blog anyway, and

b) quit your whingin', you twat!

Not only are operators figuratively "standing by" but, and this is more important, you can always call 911. 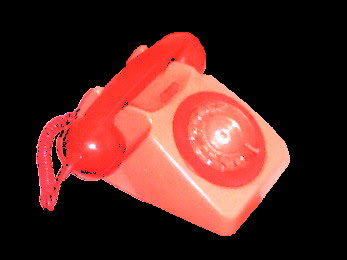 If you have a phone at home with a cord on it and it's plugged into the wall, you can call 911, even during a power outage, even if you don't pay your phone bill.

If you only have cordless phones at home, you are screwed without power. So keep a backup phone with a cord. They go for just a couple of bucks these days. 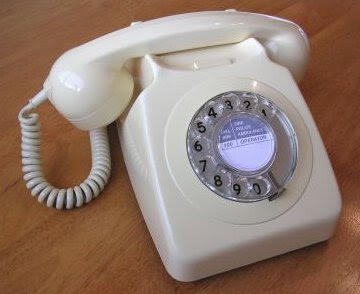 Wireless phones: you can call 911 without even having phone service. If the battery works and if the phone conforms to the local cellular system then you can dial 911. They can shut your phone off for not paying the bill but they cannot keep you from dialing 911.

VoIP is a different matter and here's my whole view on that: I wouldn't depend on it.

But back to wireless phones for a sec: If you upgrade to a new cellphone make sure you have the phone company strip your info from your old phone. 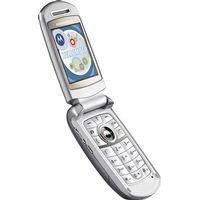 You can also donate your phones to local women's shelters so that people at risk can have a phone which can access 911. I suggest you do just that: donate the phone. You might save a life.

What you don't want to do is give the old phone to your child as a toy. It's not a toy and unless the battery is truly dead it will likely squeak out a 911 call or two even if normal calls would be hopeless.

Remember: once it's dialed, we get the call even if you hang up.

Which brings me to this news item:

SHEBOYGAN, Wis., Feb. 20 (UPI) -- No charges will be filed against an 8-year-old Wisconsin girl who made more than 100 prank calls to emergency operators last week.

Lt. Jim Risseeuw of the Sheboygan County, Wis., Sheriff's Department said the unidentified girl was traced with the help of AT&T and TracFone, which identified the phone's owner as the girl's mother, the Sheboygan Press reported Tuesday.

The woman had stopped using the phone but all cell phones can call 911 even if they don't have active service.

Risseeuw said the third-grader identified herself to dispatchers as "Matthew" when she made the calls, some of which contained profanities, the report said.

However, he said because of her age, she won't be charged.

"At this point, the matter was corrected," Risseeuw said. "We'll leave it for the parents to deal with."

Note that the 8 year old cheesehead not only dialed 911 on purpose but she used profanity and adopted an alias.

Who says the public school system is failing? This girl is already qualified to be a member of the United States Congress.

The Burning Flesh Smell Of Branding 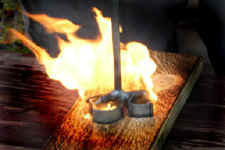 My fair city just paid $30,000 to develop a new "brand" to advertise itself and is spending an additional $200,000 to start pimping the hell out of this brand.

The old brand was: Wild About Anchorage. They had a cute jingle and cartoon animals including the Moose. It was the 80's and I was an occasional badass babysitter*… ah the memories.

No kidding, check it out HERE. (Seriously, have a look at the logo, I'd reprint it here but someone might complain - copyrights and all.)

Notice the red color splash behind the words. It looks like the splat mark made when you smash a mosquito. Well, okay, so that would be appropriate.

I would categorize the $10,000 per word brand as an incredibly bad choice if not for the town they had to work with.

Fast Food Nation by Eric Schlosser is wide-ranging but this point struck home: all the franchising in this country has served to drain most of the local flavor from each town. Los Anchorage is a prime example. Our newest feature and soon to be the hottest spot in town? Target. Yep. That's it. Target.

This is my home and I'm happy to live here but I'm not exactly sure why anyone would like to move here. There are a lot of funky little towns in and, while I wouldn't actually want to move to one, I can see the appeal of moving to one of those: wilderness, solitude, peace and quiet, etc. Los Anchorage… well…

Our civic leaders would like you to believe that has all the advantages of a big city but retains the small-town feel and beauty of the rest of . This is not an entirely false premise but it overlooks the fact that we have our share of big city problems plus the bonus of being far enough away from the rest of the world that everything here is less available and more expensive.

Far be it for me to criticize without offering alternatives, humble as they may be. 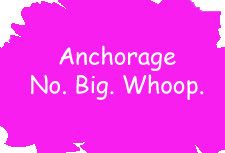 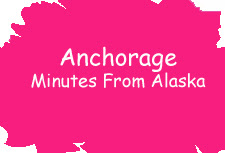 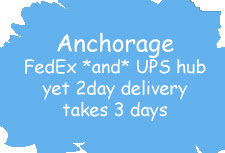 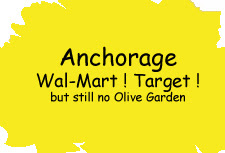 Tell me some of your ideas!!

* Shoutout to Lyndsay, her mom, and her seeester!