As part of a three day in-service training for all dispatchers I've been doing a series of "Introduction to CIT" two hour sessions. My dog and pony show involves: introducing the concept of CIT, discussing the various major types of mental illnesses we will encounter, discuss psychiatric meds and their side effects, and discuss the resources available to consumers and to their families in our local area.

I've done three and have three to go. By the sixth one I'll have my song and dance down pat. Each of the first three went fine but I didn't knock anyone's socks off.

I suppose I exposed everyone in the most recent group to strep, so that might make it memorable.

I knew I was missing something… some essential piece of knowledge that would hook people. We already have the tools to deal with folks in crisis; we do it all day every day. Info on the conditions and drugs is helpful but it's not all that inspiring.

What I need to explain first thing is the answer to a question I was posed in the most recent class: "How did the system go so horribly wrong?"

That answer, and many interesting stories, can be found in the book: 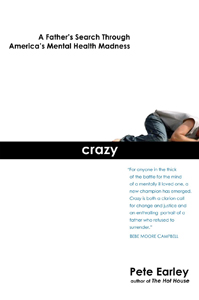 Pete Earley was a reporter for the Washington Post and has written seven other non-fiction books and two novels. He was qualified and prepared to write a startling exposé about pretty much any subject.

He was not prepared for one of his adult sons becoming mentally ill and then encountering the justice system. He was shocked.

You might be too, although perhaps not as much as the average bear. My audience is pretty "mental health community" savvy but this book is comprehensive enough to teach everyone one or two things and illuminate several areas I'd wager you'd never thought about.

Pete's college student son Mike, just recently diagnosed as bipolar, broke into an unoccupied residence, picked at random, to take a bath. Police responded and sent a canine in. The dog bit him and held him until five officers were able to subdue him (he was fighting).

Felony convictions, folks, will mess up your life forever. I suggest you avoid them.

I won't give away the rest of Mike's story, but it's both interesting and frustrating.

Earley's own blurb on the book (from www.peteearley.com )

" I had no idea. I'd been a journalist for thirty years and written extensively about crime and punishment and society. But I'd always been on the outside looking in. I had no idea what it was like to be on the inside looking out – until my son, Mike, was declared mentally ill. Suddenly the two of us were thrown headlong into the maze of contradictions, disparities and Catch-22s that make up 's mental health system. Crazy: A Father's Search Through America's Mental Health Madness is a nonfiction book that tells two stories. The first is my son's. The second describes what I observed during a year-long investigation inside the jail, where I was given unrestricted access. I feel more passionately about this book than any I have every written. Our nation's jails and prisons have become our new mental asylums. I wrote this book as a wake-up call to expose how persons with mental illness are ending up behind bars when what they need is help, not punishment.

• Important note: The word “CRAZY” in the book title refers to the mental health care system."

You can read the first chapter of the book for free on his website.

If you wonder about how we got into such a mess, I highly recommend Crazy as the best place to start your search.

I am so crazy, that I am sane:
http://www.psychlaws.org/