"WASHINGTON (AP) — Russia under President Vladimir Putin is a "one-man dictatorship" and he should do more to help the U.S. confront Iran's nuclear ambitions, Sen. Lindsey Graham, R-S.C., said Sunday....."

Dear Senator Graham, Chairman of the Department of Redundancy Department,

For giggles, the Russian word for dictatorship is: диктатура

Which brings me to a little history:

This is the Alaska Flag: 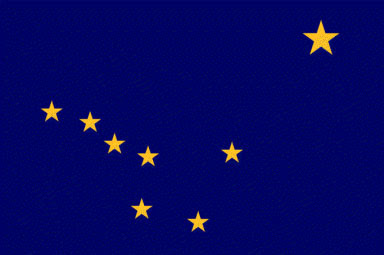 was a Russian territory until 1867 when it was sold to the for $7.2 million (remember this was 1867 dollars and no one had found our oil yet).

There was, perhaps still is, a man in (our state capitol) who flew various flags at various times of the year but by far my favorite was his interpretation of the flag if had not sold .

While I feel privileged to live in the , I still smile a little when I remember a little joke popular in 1991 when the dissolved:

Isn't it ironic that Alaska is a "red" state?

I have to admit, I prefer the blue flag, though.


Now, can you SING the Alaska State Flag Song?

"Eight stars of gold on a field of blue, Alaska's flag may it mean to you...."

I can still play the tune in my head.

After 11 years in Oregon, I don't even know the Oregon song.

You can leap to a midi version of the song from this page:


You can listen to Oregon's song, which sounds like something from a funeral home. Creepy.

It is good to be King!

I happen to think that the Alaska Flag Song is pretty horrible. It's no "Swanee River," let me tell you.

Lindsay Graham is mostly right...Putin is a murderous one-man dictator. See this story for why.