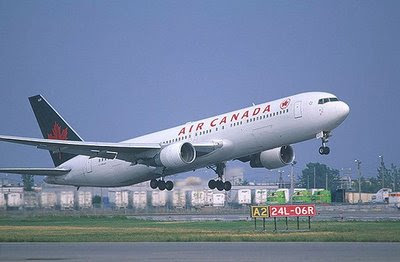 An air hostess helped land a jet carrying 146 passengers after the co-pilot had an apparent mental breakdown over the , investigators revealed today.

The UK-bound plane made an emergency diversion to , in , last January after the Air Canada flight officer began a ‘rambling and disjointed’ conversation, said an official report.

Another attendant suffered wrist injuries as the crew forcibly removed the co-pilot from the cockpit controls and restrained him in a seat in the cabin.

The captain of the Boeing 767 from to Heathrow asked staff to seek out any trained pilots onboard.

One of the female cabin crew came forward saying she had a commercial pilot’s licence and was asked to take over in the co-pilot’s seat.

The captain praised the attendant to investigators for helping him safely land the plane at Shannon, where the ill flight officer was removed and admitted to the acute psychiatric unit of for 11 days.

He was later flown home to by an air ambulance for further care, according to the investigation.

The official report into the incident by the Irish Air Accident Investigation Unit (AAIU) did not explicitly refer to the co-pilot’s medical condition.

But it recorded the views of two doctors onboard that he was in a ‘confused and disorientated state’.

The captain also reported that his colleague became uncharacteristically ‘belligerent and unco-operative’ and was ‘effectively incapacitated’.

One passenger at the time reported seeing the distraught co-pilot yelling for God as he was being restrained.

The AAIU praised the actions of both the captain and crew in diverting to the nearest airport and removing the co-pilot from the controls.

‘For his own well-being and the safety of the aircraft, the most appropriate course of action was to stand him down from duty and seek medical attention which was available on board,’ said the report.

‘The commander (captain) realising he was faced with a difficult and serious situation used tact and understanding and kept control of the situation at all times.

‘The situation was dealt with in a professional manner... As such, the commander and flight attendants should be commended for their professionalism in the handling of this event.’

There were no safety recommendations from the investigation.

Although flying sucks for a big fat guy such as myself, I consider myself a pretty mellow passenger.

That being said, if the crew starts saying "Peanuts or pretzels, sir? And do you happen to know how to fly a commerical aircraft?" I'd imagine I'd quietly crap myself.
All kidding aside, how cool is it that the crew could efficiently take care of a psychotic co-pilot? Flippin' CIT Pilot of the year, that one.
Posted by Eric at 11/20/2008 08:01:00 PM