I knew Oregon was full of tree-huggers but… 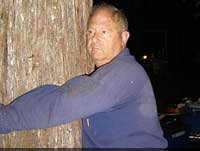 (AP) - A group of campers tied a peeping Tom suspect to a tree, keeping him bound until police arrived.

Richard H. Berkey, 63, was charged with private indecency, a misdemeanor, by sheriff's deputies who were called to the Big Fan Campground near Bagby Hot Springs last weekend, according to Clackamas County Detective Jim Strovink.

Campers told deputies they recognized Berkey from a similar incident at the campground last year and wanted to make sure he didn't get away.

The 2006 incident was reported to police but did not result in charges.

"Last year, we took down his license plate number and turned it in to the sheriff, but there wasn't a lot they could do really," said Jason Dugan, one of the campers. "This year, that wasn't happening."

Dugan and another camper, Michelle Brandow, said several friends were playing chess, eating and relaxing last Saturday, when they heard rustling in an area the women used as an open latrine. Dugan went to investigate, saw a man running from the area and tackled him.

With help from two other campers, Dugan led Berkey to the group's campsite and tied him to a tree. Another camper left to call police.

Berkey told KGW-TV in he was surprised by the response. "I just didn't think it was that big of a deal," he said. A phone call to Berkey's house in Beaverton was not immediately returned Friday.

Berkey is scheduled to appear in court on Sept. 18.

Not that I condone peeping in any fashion, this guy obviously has a fetish that went too far, but, what do you expect when you are outside? Crazy knows no boundaries. Plus, if it happened BEFORE, why would you go BACK without something that ensured your privacy?

It had to be rope made from hemp, by the way.

I'm pasting below a better copy of the article, as referenced by the Rick Emerson Radio Program (rickemerson.com, 970.am) as quoted from KGW.Com.

He was cited for private indecency. Wouldn't it be public? Or perhaps 'privates' indecency?

This was his hobby? Dude! Try model airplanes, you can get a good rush from the glue.

The last line really sells it. I've lived here 12 years, and it is really just a bunch of freaks on both sides of the spectrum. (myself included)


On Saturday, a group of adults were camping at the Big Fan Campground near Bagby Hot Springs in Estacada when they spotted a man watching female campers defecating and urnating at an open latrine location in the camping area.

A 'posse' of campers captured the man as he tried to flee and brought him back to the campground where they tied him to a tree.

While tied to the tree, the man reportedly admitted that he'd been peeping at campground toilets for years as a sort of 'hobby'.


Jason Dugan, one of those who caught the peeper, said they caught the same man peeping at this campground last year as well.

"Remember me from last year?", Dugan says the man said.

The suspect, Richard Berkey of Beaverton, was also discovered to be in possession of maps for the following areas of interest to investigators: Gifford-Pinchot National Forest (Washington); the Deschutes National Forest; Tillamook National Forest, and the Willamette National Forest.
Berkey was cited for private indecency and released.

"I'm really surprised," Berkey told KGW, "I just didn't think it was that big of a deal."

Vickie Dugan, one of the women spied on, said the women went in pairs to go to the bathroom, but did not have anything to shield themselves because they thought it was secluded and private.

"Next time, we're bringing a tarp!" she said.

And heh heh... he said "Beaverton"

That's awesome!! Thanks, I wander BE all the time but never saw your blog thanks for taking the time to comment..I'll be sure to read more later