As I have gotten older the memories of the holidays of my youth have begun to blend together.

I remember at least two holidays in the winter when a flaming log rolled out of our fireplace onto the floor. Here is the top of the fireplace and the family in question. I'm the eldest child, J-bro is number two, and rounding out the top three is Drew. 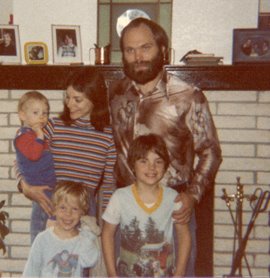 Of these two flaming logs, the one which caused the greatest scar on the floor and the most vivid memory occurred during Elvis Presley’s “Live from ” concert. The Elvis log landed on the long black wool skirt of the only guest in attendance who was actually watching the concert, someone I will call “The Southern Woman.” None of my immediate family have ever been Elvis fans so I recall (perhaps only in wishful-thinking nostalgia) that it had served her right: I would have much rather watched The Love Boat or The Wonderful World Of Disney or whatever was on one of the three other channels in Anchorage at the time than the sweaty white jump-suited “King .”

On a prior occasion my dad was close by the fallen log and had reacted by simply reaching down and grabbing the log in his bare hands and throwing it back into the fireplace with no damage done. At the time I thought this was heroic. Now I realize that it was probably mostly instinctive and painful. Although that meets a certain definition of heroism I suppose.

The “Elvis Log” rolled out of the fireplace and onto the Southern Woman’s skirt while my dad was in the kitchen, far away from The King’s concert. He raced to the scene of the fire, picked up the log barehanded, and threw it back into the fireplace but by the time he arrived the carpet had begun to smolder. I’m not sure whether he happened to have a shop knife with him or whether he used some other piece of cutlery to cut a hole in the carpet to expose the underflooring, but soon it was cut and water was poured on the scorched wood.

And ugly green throw-rug sat on top of the ugly multi-colored green and gold 70’s carpet until it was replaced decades later. 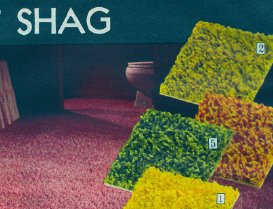 During that time if one had folded back the rug and parted the labia of the split carpet, they would discover a dark burn mark that looked a little like this. 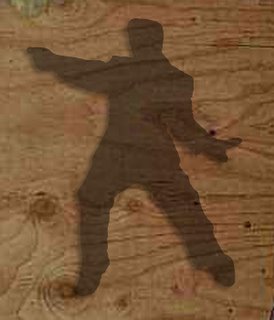 I’d like to think The King would have been appreciated it.

Just takin care of business, sounds like to me. I had one of those ugly yellow shag carpets in one of my first apartments--what were they thinking. UGLY.

Cute picture of you as a kid. LOL

LOL! Man, you look the same and I think your folks cloned you! Holy moses!
I must be one sick puppy to think dirty thoughts as I read the words, "Elvis' Log rolled out of the fireplace and onto the Southern Woman’s skirt" Who knew Elvis would be poking his log around some nice southern gal? ;)
I would have thought my pops heroic too.
Have a great weekend!
Lois Lane

OMG! This was an awesome post! (I have been reading since you started reading me) I buy those Duraflame logs (which have since been renamed Super Happy Fun Log, there is a post coming on them), and everytime I live in fear that one will roll out of the fireplace and start my apartment on fire. Now I know my fears are not unfounded!

Congrats on your 2 year anniversary as well!!

nice. a long ass time ago, we had my mom's brother's wife's in-laws over (along with a bunch of others -- so, my aunt's mom and dad) in from NC. we were about ? 5 and 7? julie (joanne's mom) was druuunnk. i was playing piano or something for everyone. she comes and sits down at the edge. she falls off and INTO the tree. right into one of those classic kids' ornaments you used to make when we used pokey things without fear of lawsuits...the ones with the stickpins and sequins into a big ball of foam.

she gets up, and swear to god/dess, there's fucking pins sticking out of her ass. i'm trying hard not to laugh (i'm 7?) and my sister's PISSED/near to tears cause her ornament's ruined (she's 5?). everyone else is red-faced and laughing sort of (drunk as well).

oh, and i'm crossing the street at jackson and the river after a lunch date with my friend, kelly, and what do i see?? three or four older women with EXACTLY the shade of red hats you had in your picture getting in? out? of a cab next to union station.

I'm not entirely sure what Thanksgiving fodder from our family that you are going to publicize.
Unless of course it involves a certain glass prop from a restaurant. (Which, I found them, and can buy them if you want more nostalgia...)

Far be it from me to spoil your future writing.
Jeeeez

Mon and dad don't even look old enough to have 3 kids in that picture.

I have pics of that old shag carpet too, if you are really dying to have a pic of it.

And, what happened to the satanic verification system?

HA! Nice, I love shag carpeting though, very art deco. I've granted a wish of yours at my blog, check it out.

Thanks for the trip down memory lane. I had forgotten all about The Wonderful World of Disney. I had the multi-colored green shag carpet in my bedroom. And my family did not like to watch Elvis specials, but we did like The Love Boat.

It sounds like I need to update you and my affection for Elvis. Strange, too, since I among one of the eldest in our family. At one time I took your mother and your Auntie Jo so see Blue Hawaii. It turns out they did not become Elvis fans (they were more into the Beatles, but ever since Blue Hawaii I have been in love with Elvis and also in love with Hawaii. Who would have thought?

GEEEZ! Looks like I should proof read my typing a little more carefully before I login to publish on your blog.

LOL! Dig those clothes!
I vividly remember everything in our house being that pukeass green color or mustard yellow. Our bathroom had wallpaper that resembled newspaper. You could read it all while taking a shit.
Those were the days.

Captivate blog. I surf the web for blogs this
nature.The site are wonderful and will be returned to
again!
Sweetie, go and search my plastic surgery financing blog for what you need.

Looking for information and found it at this great site... »